I was recently reminded of this enumeration.

Read, learn, and live it.

Posted by David Means at 7:05 AM No comments:

For some reason, that escapes me at the moment, I needed to generate a few passwords.  And having spent most of my career as a Software Engineer, I don't spend the time brainstorming those bits, I write a program.  Or perhaps better, I let someone else write the program.

So I did: I found someone's work, which was broken, fixed it, improved it, and now I'm sharing it with you.

Separation of Duties: Do not cross the Production and Test Streams

Here's a quick reference for justifying why an organization should never mix development, test, and production configurations and data.

Posted by David Means at 4:40 PM No comments:

What is a CSPRNG?

A CSPRNG is a Cryptographically Secure Pseudo Random Number Generator.  It is the cousin of the RNG, or Random Number Generator that we used decades ago.
In the past, rand and seed were used together to generate pseudo random numbers.  When a constant seed is provided (e.g., the number 125), the random numbers generated by rand are well-defined.
These two functions actually complement each other well in fuzz-testing applications, since the sequence of randomness can be reproduced between invocations of the tool.
However, there's a problem: these functions are not viable for creating key material.  In cryptography, well-formed randomness is required.  As such, rand and seed are not candidates for generating key material.  What is needed is a source of randomness that mimics the real world: such as the path a leaf takes when falling to the ground.
In the cryptography discipline, CSPRNGs are used to generate private and public key material, such as those used for certificates, secure shell sessions, and cryptocurrency.

Can I generate my own CSPRNG on Linux, using a shell?

Yes.  It turns that on Linux, it's a very easy task.
Every (or almost every) recent Linux implementation generates random data that can be accessed through /dev/random, /dev/arandom, and /dev/urandom.  There are differences between these implementations that you should be aware of when selecting them for any variety of solutions.  See here for more information: /dev/random vs /dev/urandom and are they secure?
For this example, we will use /dev/urandom.
The easiest method of obtaining random data is via cat.  We'll follow that by extracting a set number of bits, reformatting the data, and delivering a string of hexadecimal digits.

In this script, we grab 2048 characters of data (16384 bits), convert them to hexadecimal using od, and then grab the hex digits using cut, while removing the line-feeds.  We remove the spaces created by od, and then select a string of 32 bytes, which is 256 bits (32 x 8 == 256).
If you want a bit more sophistication, then here's a full script:

The Only Valid Measurement of Security Quality 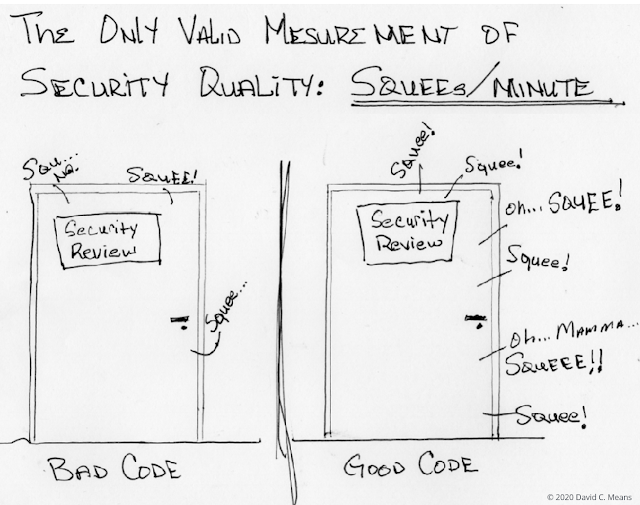 Posted by David Means at 1:21 PM No comments:

The CPU as a BlackBox

The black boxes you trust for all of your computations are not secure. They have their own backdoors.
This is why we do defense in depth.  While configuring our systems to run only authenticated software may seem to be over-kill, it may soon be the only reasonable solution.

Investigate ways to enable your systems to execute signed and authenticated software only.

This talk will demonstrate what everyone has long feared but never proven: there are hardware backdoors in some x86 processors, and they're buried deeper than we ever imagined possible. While this research specifically examines a third-party processor, we use this as a stepping stone to explore the feasibility of more widespread hardware backdoors.

A processor is not a trusted black box for running code; on the contrary, modern x86 chips are packed full of secret instructions and hardware bugs. In this talk, we'll demonstrate how page fault analysis and some creative processor fuzzing can be used to exhaustively search the x86 instruction set and uncover the secrets buried in your chipset.

YouTube: Breaking the x86 Instruction Set
Posted by David Means at 11:18 AM No comments:

A password policy cannot be created in a vacuum, it must be derived from the Security Policy & Process of the Organization. Usually, this is called the ISMS, or Information Security Management System. In the general case, it will consist of a variety of policy documents addressing different aspects of information security.

For Banking and Payments, an ISMS will direct its Business Units to derive best practices from at least the following standards and regulatory artifacts:
Per PCI, SOX and GLBA requirements, your password needs will comply with these requirements:

Sarbanes-Oxley experts and auditors recommend that to meet the minimum for compliance, passwords should:

When creating any kind of Security Policy, avoid the temptation to first consider assets, such as information systems consisting of infrastructure, applications, and operating systems. Instead, focus on the sensitive information that requires protection.

It is a high-level statement (plan or framework) addressing security requirements and objectives. It may address an entire organization or be specific to an issue or system.

It is a type of governance in that it expresses the security framework established by management. It is the primary method by which an organization sets expectations for a variety of topics.

Once you understand the data that must be protected, and the systems that process that data, the risks to which you are most commonly exposed, you can then begin developing requirements for Information Systems relevant to:

Posted by David Means at 5:53 PM No comments: